Špindlerův Mlýn lies in the North-east Bohemia near the border with Poland. It belongs to the most popular skiing centres in the Czech republic.

The town lies in the Giant Mountain National Park and extend in an area of 77 square kilometres and has got 4 parts - Přední Labská, Labská, Bedřichov and Svatý Petr.

This original mining and wood cutting settlement started to be called Špindlerův Mlýn at the end of the 18th century after a mill of a Špindl clan built on the river Labe. From the end of the 18th century and mainly from the 19th century, the people started to build more. Many hotels and restaurants were built between the 1st and 2nd world war and after the year 1945. The symbol of Špindlerův Mlýn is a white bridge built in 1911 and is situated directly in the town centre. Above the town centre you can also find a St. Peter and Paul's church built in the 1802.

Špindlerův Mlýn is an ideal place for tourists, who can use plenty of tourist and cyclic routes. The most favourite skiing ranges are Svatý Petr and Medvědín. Both of them have got good snow conditions not just for professional skiers but for beginners too. In both of them are snowboard parks. Špindlerův Mlýn is also available to cross-country lovers. There is also plenty of other sport activities - bobsleigh track, sledge slide, snow-tubing, horse riding, horse carriages, fishing, playing tennis, squash, bowling and also swimming, use of sauna, fitness, sun beds, massages, paragliding, rafting and other mountain activities. 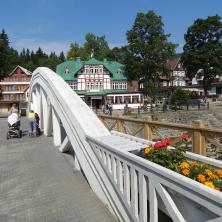 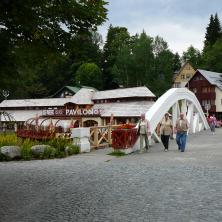 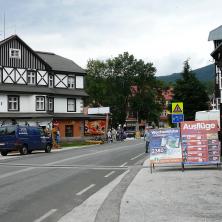 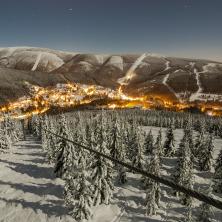 Špindlerův Mlýn ski resort is the most popular ski area of winter sports in the Czech Republic. It is situated 120 km north of Prague. The place provides excellent conditions for both down hill and cross - country skiing.
More

The Labska Dam, at an altitude of 694 m a.s.l., is at the entry to the town of Spindleruv Mlyn. It is the first dam on the River Labe. As a technical monument, it is a suitable destination for a trip from the town’s centre, even for families with small children.
More

We have a good tip for a great experience for everyone who is planning a trip or vacation. Head to the Krkonoše Mountains and enjoy an extraordinary experience ¬¬– the HappyWorld Špindlerův Mlýn and Harrachov Bobsleigh Track open 365 days a year. The Krkonoše bobsleigh track is also a popular destination for families and schools, and bicycle or motorcycle trips.
More

Come take a rest and renew your energy in the Lesana wellness and spa hotel.
More

Pension Svatý Petr offers accommodation in city Špindlerův Mlýn, in a beautiful area of Giant Mountains, only 70 metres away from the base station of the Svatý Petr ski-site funicular. To put it simply, as close as you’ve always wanted to be.
More

The Špindlerův Mlýn Ski Resort is the best known winter sports centre in the Czech Republic. It is elevated between 702 and 1,235 metres above sea level.
More

The AQUA Park Špindlerův Mlýn offers you a pleasant rest in the relaxation and children\\\'s pool with four roller coasters including a boat roller coaster. The centre also offers a large and small whirlpool, strong current, surf and other attractions.
More

The trail leads on the ridge of Krkonoše Mountains.
More

Cycle path from Vrchlabí to Lánov

From Špindlerův Mlýn to the Elbe Waterfall and back again

A hiking trail to the Elbe Spring
More

The hotel is located in the centre of the highest Czech mountains – the Krkonoše Mountains – where it offers accommodation in the famous accommodation resort of Špindlerův Mlýn - at 800 metres above sea - which is popular among tourists.
More

The Hotel Hanička*** is located in the popular mountain resort of Špindlerův Mlýn at 780 metres above sea.
More

The Hotel Olympie - Špindlerův Mlýn is situated in the picturesque valley of Svatý Petr 500 m from the ski resort.
More

The Monkey Park in Spindleruv Mlyn is near the main access to the local popular bobsleigh track.
More

Yellow Point is a company specialising in many adventure sports and also offers the opportunity to take a trip on quad bike.
More

Route for wheelchair bound from Špindlerův Mlýn to the Bílé Labe

Historically the first mountain path in the Krkonoše Mountains intended for the physically handicapped can be found in Špindlerův Mlýn.
More

After undergoing reconstruction in 2011, this modernly conceived club with a capacity of up to 1200 people has become the undisputed largest club in the Czech mountains.
More

The trail leads through the town’s cadastral territory and connects interesting modern and historical places.
More

To Labsky Důl Valley for Views