The generously conceived loggia is connected to the Libosad Park.

The Wallenstein`s loggia is one of the most significant objects of cultural and architectonic heritage in the Jičín region. It forms a part of a landscaping composition whose conception originated in the era of Albrecht von Wallenstein, who strove to turn Jičín into the capital of his vast dominions. The loggia was built according to a design by Italian architect N. Sebregondi in 1630 - 1634. It received a minor adjustment in 1813. The loggia features an extensive game preserve and park called Libosad.

Nowadays, a part of the building is open to the public and so is the garden through which a nature trail passes. It also houses occasional events and workshops targeted at families with children. 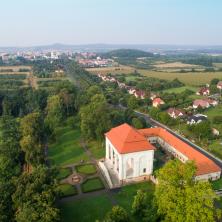 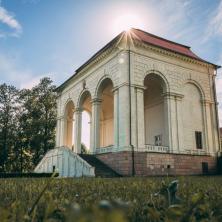 The town of Jičín, located on the edge of Bohemian Paradise, is rightly referred to as the gate to this picturesque region.
More

Albrecht von Wallenstein (hero of The Thirty Year War and the richest man after the emperor in Austrian monarchy) thinking about his landscape compositions, really had where to take his ideas from. Volcanic hills near Jičín bring special character to the valley. On the hill Veliš once was a castle, on Zebín is even now a chapel, and between the two of them is the summit Čeřovka. Its location near Valdice Alley encourages a walk rather than a long excursion.
More

To castles and chateaus in Jičín Region